I haven’t added anything to this blog since the beginning of the term but, it is now time to once again praise a great crew of people.  The students from the first Wood Fire Class at the School of Art:  Jaiwei Dai, Julia Beasley, Kendra Wile, Kewen Qiang, Monique Chartier-Kroeker, Sara Berg, Yijia Zhang, Zach Dueck, Anastasia Waly, Alexandra Ross, and Hyoungjung Lee – in no particular order.  I would also like to thank a former student and Ceramics Club co-president (with Selena Panchoo), Donna Garafolo, and a current student in another class who came to help and really did, Keith Barber.  Of the eleven students in the class, only two had ever fired a wood kiln. The learning kiln did everything that ‘it’ was supposed to do.  If a university is about learning and problem-solving and if woodfire is about building community, teamwork and collegiality then this firing was one of the most successful I have ever been a part of.  I would be proud to fire with any of these respectful, hardworking, and tenacious individuals and I am looking forward to another firing before the end of the term with this team 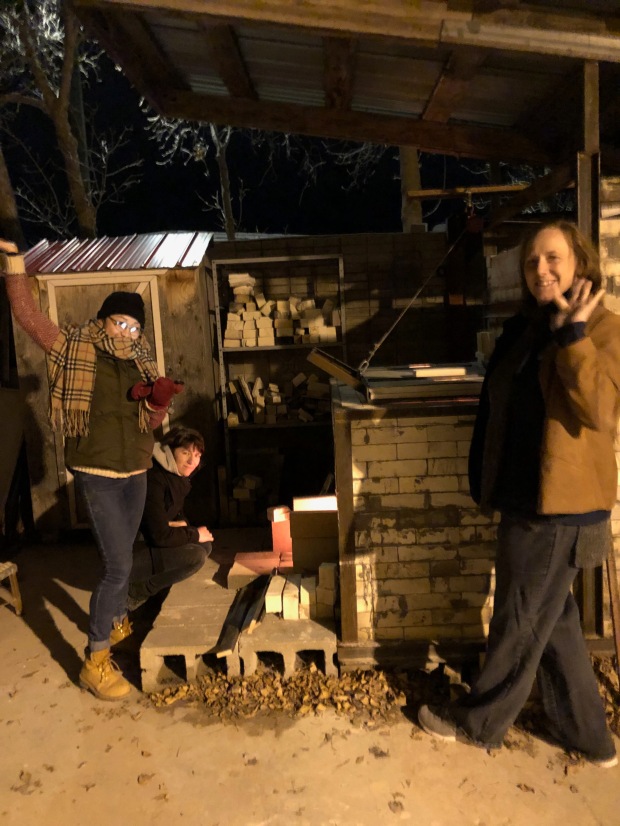 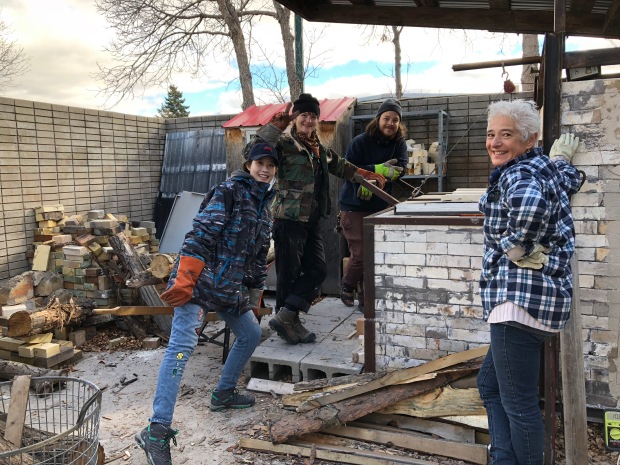 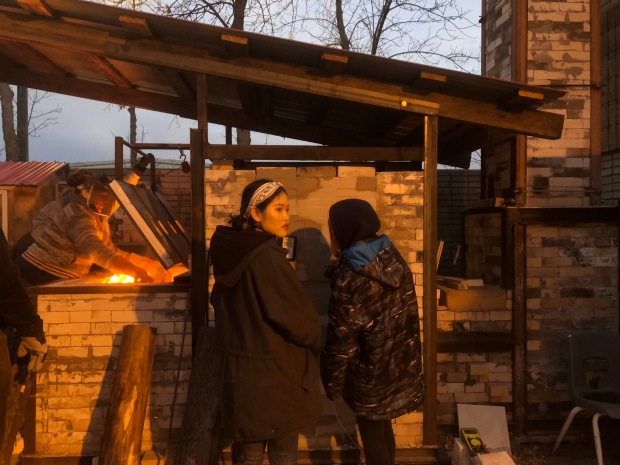 if we can procure dry logs of the right length and diameter.

While I would like to be showing you amazing pictures of lovely glazed work this morning, I can’t.  We ran out of wood at cone 3 after using up every available piece of wood and borrowing a table saw from Keith and a chainsaw from Donna.  The Oxyprobe worked brilliantly.  Students learned how to translate numbers into reducing or oxidising and even neutral atmospheres inside the kiln.  They were, however, disappointed at not having bellowing black smoke go everywhere – the kiln is, after all, a smokeless one.  They learned about building a proper ember bed and not blocking the flue, about ‘stoking on the hobs’ – even the word was like one from a totally foreign language – hobs, what are hobs?  Oh, those are the hobs!  It is interesting, as a teacher, to find that actually doing something is more of a learning tool than reading and talking about it (a bit like reading how to put a diaper on a baby and then being presented with a real child)- especially when most of the students do not know the language of wood firing.  The majority did not know what an ember was nevermind an ember bed.  They do now!

These students did everything right according to Steve Harrison’s Laid Back Wood Firing and Markus Boehm’s instructions in the summer.  They pre-heated the kiln with gas (thanks Sara from coming out in the middle of the night) and then started using sticks and branches to start the ember bed before going full fire on the floor.  They built one of the most beautiful ember beds I have seen in a long time.  They went to the hobs following the schedule in Steve Harrison’s Laidback Wood Firing – a book that I will now require for this class in the future.  But it was there with them at every moment.  And the temperature rose slowly not to warp or dunt the pieces inside.  One of the surprises to them was one that caused a moment of problem-solving.  The flames which had been ‘going down’ in the Bourry Box began to look like a ‘campfire’ – they were coming up.  When we ran out of dry suitable wood, they attempted to use some cut off slabs (remember I said they didn’t want to give up) and one of these blocked the flue into the main chamber for a bit.  Back on track they built up their ember bed, went back to the hobs, and then got to full-blown fire resulting in reduction.

Harrison lists the possibilities for a stall and we carefully examined page 14 and his list.  We ruled out not enough ember pile to preheat combustion (see feature photo with logs on hobs), going to the hobs too quickly (we followed the medium length firing schedule in the book), top of the firebox was hot enough, and we had good dry pieces when we went on the hobs (again see above).  The firebox design was made for one-metre poplar logs and worked well at the first firing.  And the students did not forget to clam up the bottom stokehole door.  This left us with two choices and they were the two culprits that defeated us at cone 3:  too big a cross-section of timber because of the large mass it took too long to reach the flashing point and that wood was wet.   We sealed up everything and cleaned up.  The area looked fantastic due to their efforts.  And, in the midst of all of this, we also did a raku firing.

So I want to repeat something because I do not want anyone to consider this firing a failure; it is not the student’s fault that the wood we had available to us at a crucial juncture was too big and too wet.  This is a learning kiln and if University is about learning and problem-solving, then this firing was 100% successful!  I do not want the students, or anyone, to think that a kiln full of beautiful glazed ceramics is ever the only goal.  If this firing had gone perfect, I actually suspect that the learning aspect would have been minimal.  We, me and the students, are humbled along with all other wood firing potters, even Steve Harrison, who have had issues firing their kilns.  I suspect that that is what, over the years, inspired Harrison to write his book so that we could learn from his experience.  Next time we are going to measure the diameter of the logs and their length.  I would give anything for the tool to measure the wetness of wood.  We will have our own chainsaw (and gas – thanks again, Donna and Keith).  We will, once again, check what to do in the ‘Harrison Bible’ and the firing will result in lovely glazed cone 12 ceramics.