Those of you who have read my blog on a regular basis might be getting tired of me telling you of the great blessings I have had or the fantastic students that have come my way this term but, both are true.  Yes that first firing went 50% as planned but gosh did we ever learn a lot.  The weather was good to us and each of us quietly hoped that there would not be an Arctic freeze during the second firing.

On Friday, November 23, it was +2 C.  That day the students helped the ceramics tech, Chris Pancoe, with sorting, cutting, and stacking the oak slabs for the firing.  For safety reasons, Chris graciously took on the chain saw so that no student got hurt despite the fact that he was trying to get everything perfect for us as he and his wife, Jennie, were leaving for Sweden to build one of the ice hotel rooms in two days time.  Congratulations to the two of you and hopefully you will have a fantastic adventure.  Monique Chartier-Kroeker and Anastasia Waly helped Chris along with Hyounjung Lee who had, until that instance, never handled a shovel.  She enjoyed clearing up that sawdust!  Great work all of you.  Inside the sculpture building, Alexandra Ross was on the chop saw helping get the pre-heat wood ready to go.

So far, the two firings in the kiln have used Poplar logs so this is going to be new to all of us as no one has used hardwood planks before.  We have oak and the slabs are big and dry.  Chris welded us a grate so that we no longer have to depend on logs and I am hoping that the hardwood doesn’t cause us to have too much of an ember bed that it blocks the flue.  We will just have to keep our eyes on that!

Did I say that Monique discovered that the features of the oak slabs were really interesting?  One piece of wood even came inside the studio to be the mascot for the firings despite the fact that there was a debate over whether it was a ‘moose’ or a ‘rabbit’.   No clinical psychologists around to analyze the meaning for those choices so all is well! 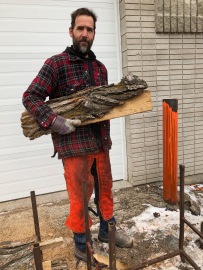 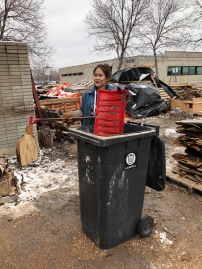 Inside Zach Dueck and Kendra Wile helped mix up two of the favorite class glazes – Haystack Green and Tin Purple while the others glazed their work and wadded the bottoms of their pots for loading this coming Friday.

Over the course of several more firings they will find their way balancing the naturalness of the wood firing and ash with their need for colour.  But no one wants ugly brown pots according to Paul Davis’s definition.  We are all looking forward to how the new Nuka glazes using the ash from the second firing and some new shinos come out in this firing.  Julia Beazley, Kewen Qiang, and Yijia Zhang were putting the final touches on their new bisque pieces for the firing in our glaze room.

We will keep you posted on how it goes….Sara Berg will light the gas burner to pre-heat the kiln and chimney at 3am Saturday and hopefully the rest of us will have a ‘laid back’ wood firing and be finished by 11pm. This time we will not run out of wood and those darn cones will bend and the pyrometer will work!  Since there is so much salt build up we may just toss a little extra in!  Stay posted for action shots beginning Friday night! 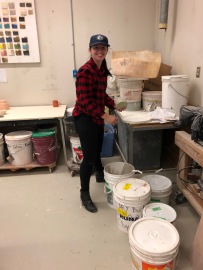 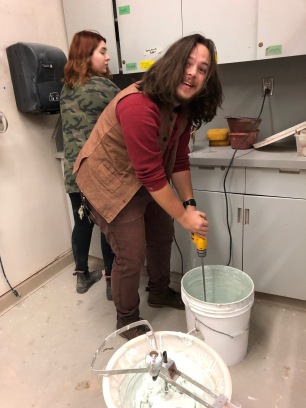