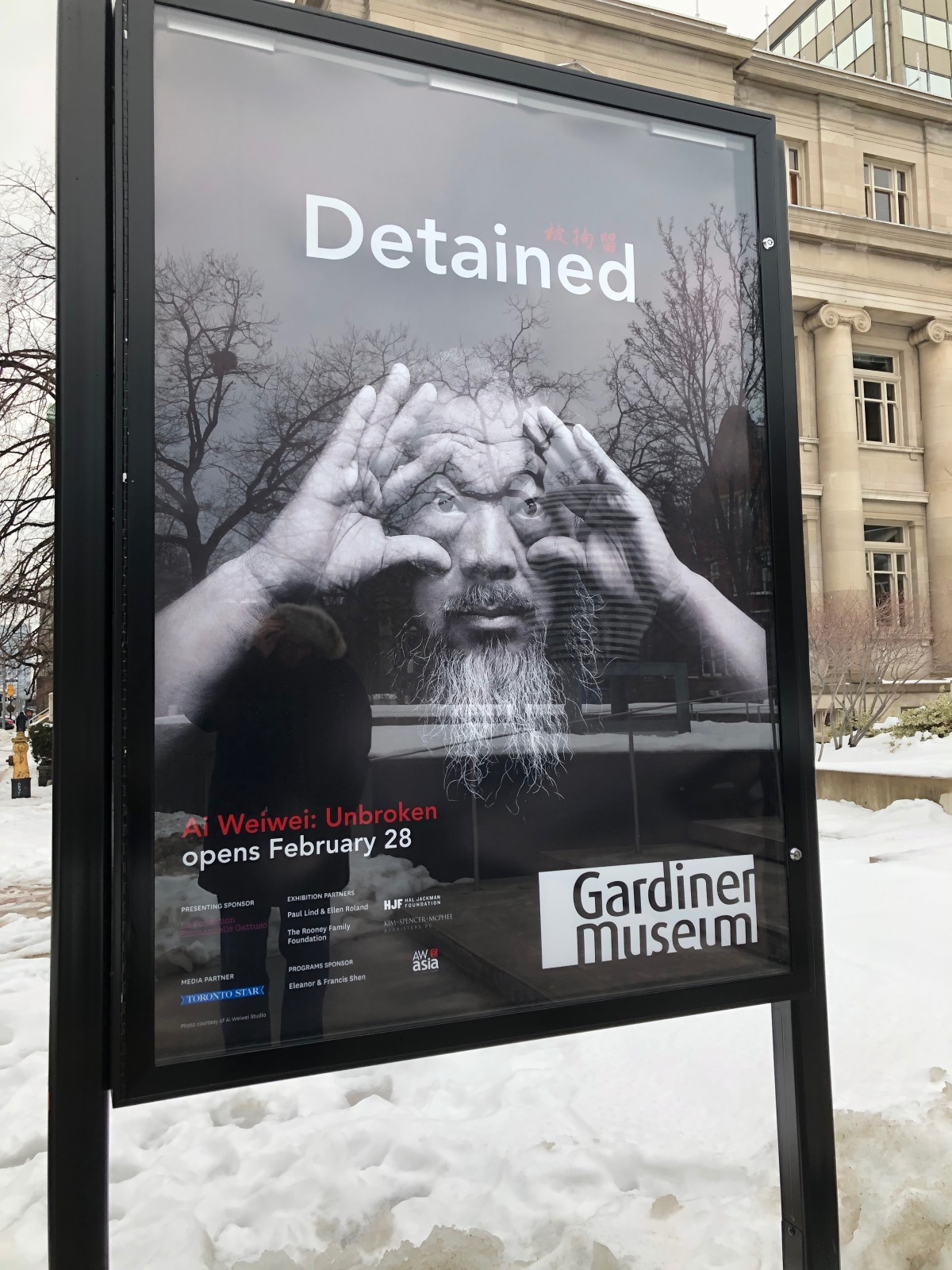 The Gardiner Museum in Toronto will be hosting Ai WeiWei’s Unbroken this spring.  The exhibition opens on 28 February and continues until 9 June. Today, all that was visible was a sign saying ‘Installation in Progress’. 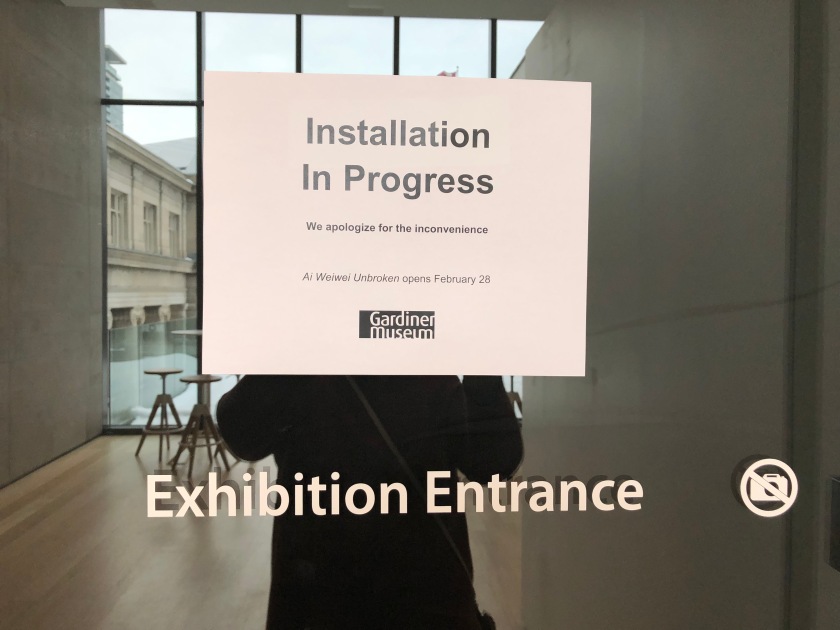 This is not the first time that Ai’s work has been shown in Toronto.  In 2013, the Art Gallery of Ontario exhibited Ai WeiWei:  According to What? .  For me, the most moving section of this large exhibition was Remembering.  If you did not know the work of Ai, you might just walk past the stack of children’s backpacks.  For Ai, this was the singular work that landed him in trouble with the Chinese authorities.  The story is one of unnecessary tragedy.  In 2008, a earthquake destroyed a school in Sichuan Province.  Parents asked why the relative new building should collapse so easily.  The answer that they came to was that it was due to government negligence, a lack of building codes and regulations.  Ai could not shake the scenes of devastation from his mind and he searched for information on how many had been killed.  Months and months he spent collecting the names of the 5219 children who died that day.  A year later, Remembering opened in Munich.  Ai covered the  facade of Haus der Kunst’s with a quote from one of the children’s mothers spelled out using children’s backpacks.  The design he used and the colours were inspired by the Toys R Us logo. On his return to PRC, Ai was jailed for being a dissident for eighty-one days.  In 2015 he was allowed to leave China.  Ai does not know if he will ever return.  The authorities tell him that he is free but he doesn’t trust them.  He first relocated to Berlin with his family; he has his studio there.  Today, he still works at his studio in Munich but lives in Connecticut.  One of the biggest questions I have is:  Will Ai take on the humanitarian issues related to immigration and the United States now that he is living in that country again?

Unbroken contains elements of several previous shows.  In fact, his performance, caught in photographs, Dropping a Han Dynasty Urn, is probably one of his most iconic.  Others included at the Gardiner will be Sunflower Seeds and Coca Cola.  Sunflowers was first shown at the Tate Modern in 2010.  It was part of the Unilever Series and consisted of  100 million handmade porcelain sunflower seed husks spread over the floor of Turbine Hall.  Viewers were initially invited to walk across the installation but the ensuing amount of dust laden with silica caused the Tate Modern to rope off the exhibition for the health and safety of its staff and those coming to view the work.  Much of the significance of the piece was, thus, lost.

Porcelain is synonymous with China.  Indeed, many of you might have used the term ‘China’ to refer to the porcelain dinnerware belonging to your grandmothers.  The 100 million husks were made by hand and painted individually by individuals working in Jingdezhen, the porcelain capital of China.  Many saw the work as a comment on the global politicsl of cultural and economic exchange while others look to the significance of the symbolism of the ‘Sun’ and the ‘Sunflower’ in reference to Mao and his followers. Others see this as a comment on the individual within mass society; each of the individual seeds is part of the greater whole.  For those working within the field of ceramics, it is easy to ponder the working conditions of masses of individuals producing porcelain that boasts the economy of the country while all make very little income.

In 1995, Ai began painting Han Dynasty urns with the recognizable emblem of the American soft drink maker, Coca-Cola.  It should be noted that he has not stopped painting them since he began.  Sotheby’s has the occasional one in a sale.  These pieces are terribly subversive.  They immediately imply the destruction of China’s traditional culture!   At their first showings, visitors wondered if the vases that Ai had so boldly painted with the bright red lettering, Coca Cola, were actually fakes.  Anyone who has visited the Saturday Dirt Market in Beijing knows precisely how well ceramic fakes are constructed in PRC.  Han vases and tiny clay figurines from the same era are offered alongside ‘original’ Song dynasty yellow porcelain cups for a few dollars.  On the one hand, the act of defacing the Han vase is an iconoclasm no different than when the Muslims capturing Constantinople destroyed the mosaics in the Haiga Sophia.  Ai assures everyone that the vases are authentic and so plentiful that their monetary and cultural value is negligible.  Still, for those who do not know this, the act of dropping an ancient piece of art is unthinkable and, as with any other art work, raises both alarm and questions.  It is interesting to note that Coke was being sold in China in 1920.  It is one of the oldest American firms trading in the country and in 2009 accounted for half of the soft drink sales in the country.  Some argue that the shared imagery – that of a traditional ceramic urn made by anyone covered with a bright red American logo, is a fitting allegory for twenty-first century Chinese culture as the country grows into the number one consumer culture in the world (set in 2019 to be the leading purchaser of luxury goods).

It is an exciting time for anyone interested in the work of this contemporary artist.  And a big round of applause goes to the Gardiner.  Their director and curators have worked hard to keep ceramics relevant.  As such, they have brought world-class speakers and exhibitions to Toronto.  Not long ago there was a conversation with Garth Clarke, another was the co-sponsorship with the AGO of Edmund de Waal’s talk on the history of porcelain coinciding with the launch of his book, The White Road.  Last year, Yoko Ono’s Riverbed came to the City.  I only wish I lived closer…… 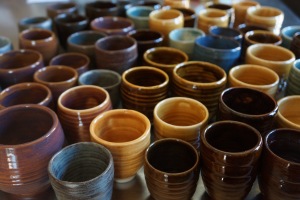