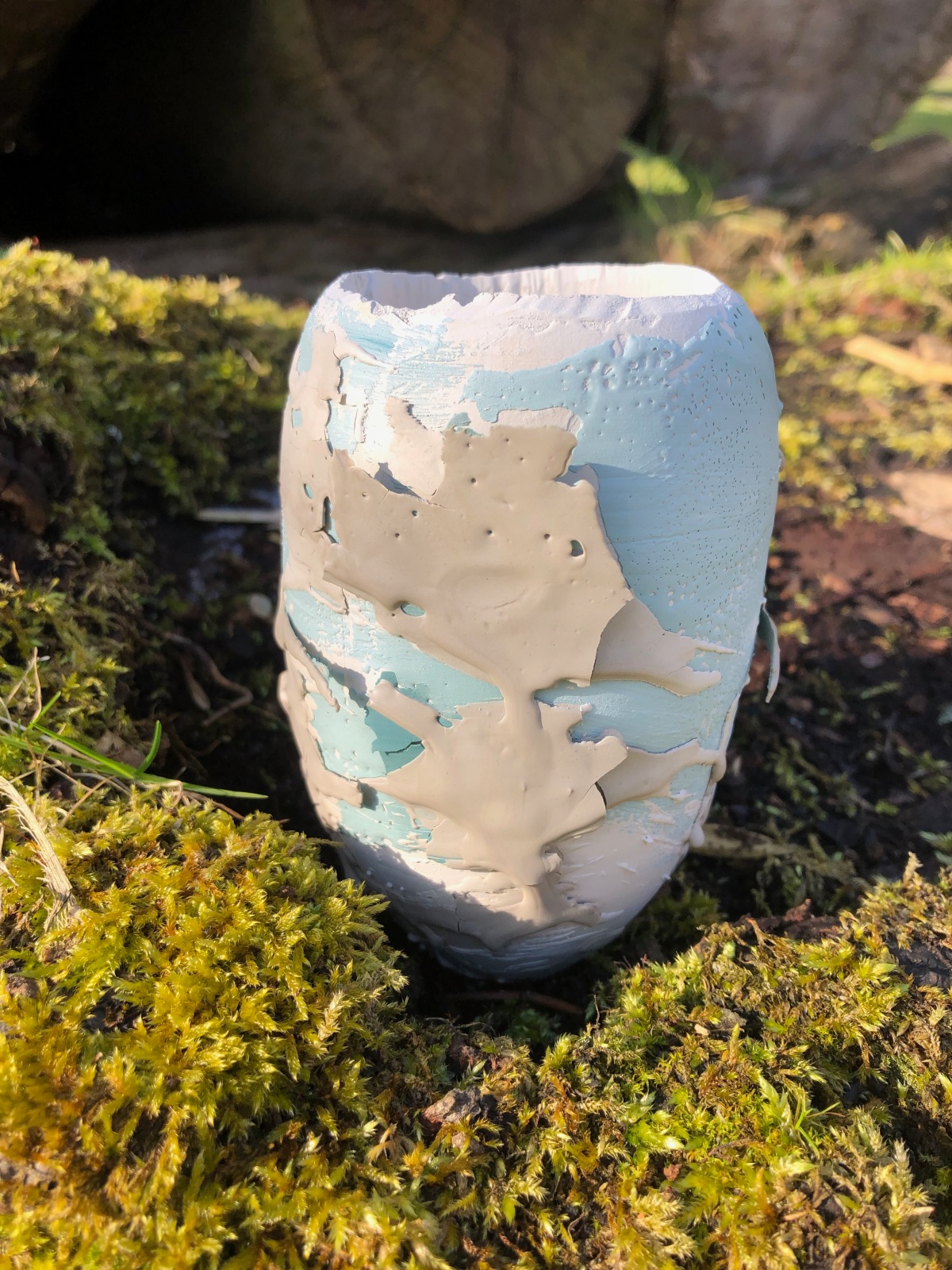 Inside my kiln at home is approximately three dozen perfectly formed, balanced, light in weight porcelain bottles with chattering.  There are boxes of less than optimum bottles broken up.  I couldn’t decide whether to really go for the colour which at the moment seems to be a range of greens and blues or blue-greens using stains.  For the past six months or so I have personally been put off by glaze.  Nothing seemed to capture what was in my head and that is where Hospitalfield comes in.  When I applied to be a Resident Interdisciplinary artist here, I had no idea if I would be accepted.  The ration of applicants to those accepted I have found is very low.  One in twenty individuals.  I am in great company.  My studio mates are amazing.  Lucy Barlow is shortlisted for the First Plinth public art award for Olympic Park in London.  I am really sending off the best wishes for her.  She has to finish her final presentation to the jury in a few days, so she is working on her project here and tackling that as well.  You can check out her art at lucybarlow.art      Lucy is re-entering the art world after raising her boys, and she is doing some fantastic work.  Allan Whyte also shares my studio.  He’s all over social media.  One of the things that Allan and I have learned together is that the sound recording from the iPhone is just pretty darn good.  He is working on finishing up a commission for Glasgow and is recording sounds and working with some interesting recycled materials.  Check him out, too…and of course there are five other amazing people who I will write about later including Kiki who happens to be a fantastic cook as well.

But the point I am getting at is this.  By choosing a residency that had nothing to do with ceramics I have grown immensely in these eight days.  It isn’t just stepping back in time, sitting here in this fantastic historical room with the paint and wallpaper peeling away in places that have inspired me but it is the sea.  I have never lived by the sea.  The east coast of Scotland is flat.  In fact, it is a bit of a cosmic joke because it reminds me of Manitoba!  Flat.  I did say flat, right?  Just in case you don’t believe me, those really high hills that are the only thing Scottish Tourism sends out – well, they are on the west coast of Scotland.  The work that I am producing is my first reaction to this house and to the sea and the light.  The featured bottle still has a lip that is smoothed out, and the joins of where the moulds met have been smoothed but that is now all gone.

We had rain and blowing rain and snow when these were made and these huge clouds trying to push the sky backwards.  Today the sky was white, and the sea was blue.  It is ever-present.  When the chill is down to your bones even though you can see the daffodils blooming in the garden, it is because of the sea.  When the slip in your mould doesn’t dry like it does in Manitoba in the winter, it is the sea.  Damp.  Moss.  Cold.  And yet, I would not give up these eight days for anything.  I highly recommend anyone considering a residency to step outside their comfort zone and challenge what they have been doing.  For me, anyway, it has allowed me a time to be free, to be playful, to react to something and someplace.  Magical.

The sea is just beyond the kitchen garden beyond the walls of the house.

For years it was the life of this village.  And today, if you meander around the harbour, you can find ‘Smokie’ stalls.  If in Manitoba you are expecting smoked sausage, you might be right, but here in Arbroath it is smoked fish.  There are five or six places.

Just a funny historical fact.  The people in Dundee used to have a tradition.  They would not eat herring, but on New Years, they would wrap red herring in little paper clothes and hang them outside to bring good luck.  It is called ‘Dressed Herring’, and it didn’t matter if the fish was smoked, salted, or dried.  You could also purchase them ready clothed at some of the market stalls in town.  They even made acceptable gifts I am told!

And with that little tidbit, I will close this blog today.  I am looking forward to the weather being balmy on Wednesday, and I am going to sneak out of the studio and take you on a trip to two of Scotland’s beautiful castles.  Keep your fingers crossed for the excellent weather arriving!