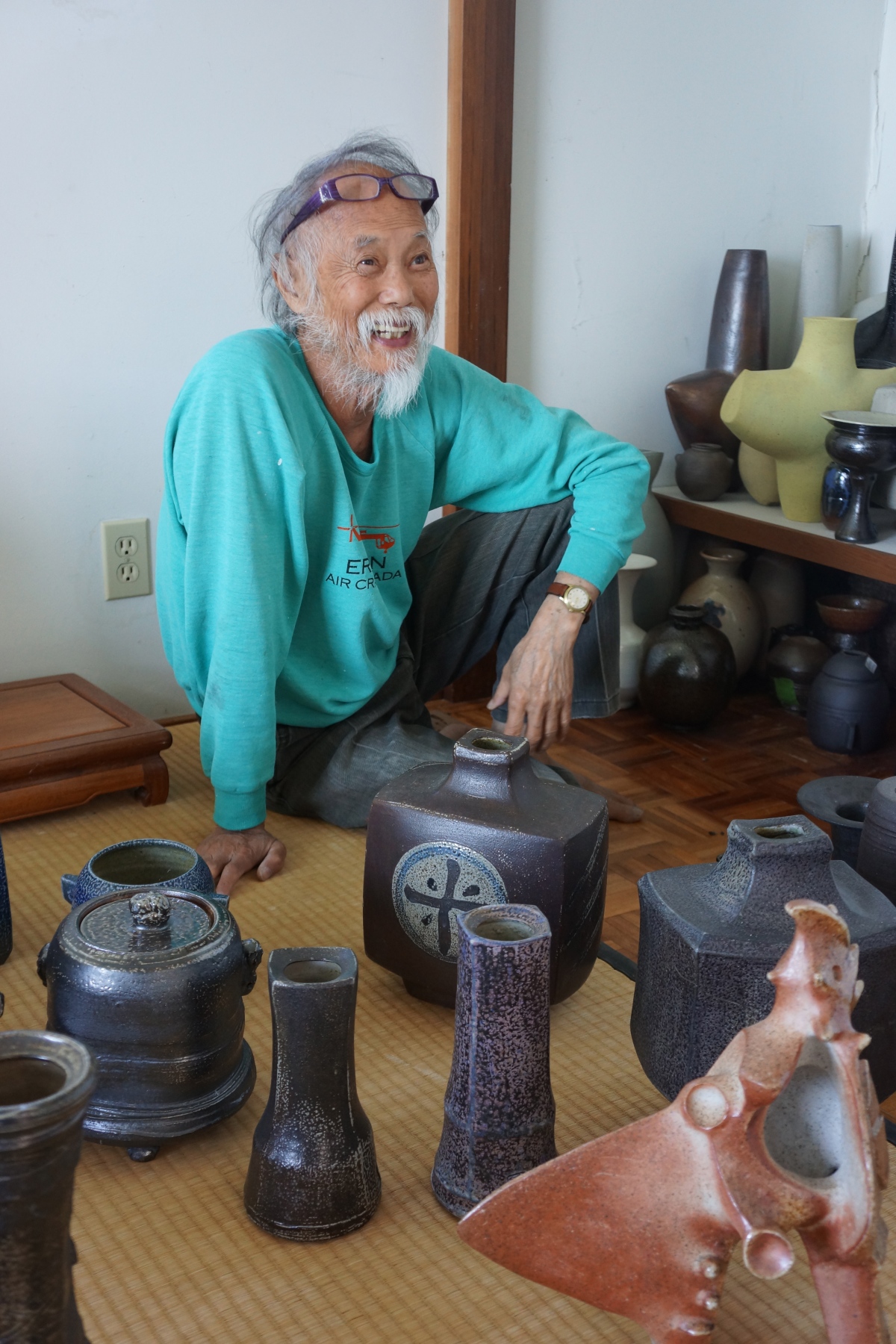 I first met Wayne Ngan in 1987 when I was the Director of the then ‘being built’ University College-UMSU Gallery at the University of Manitoba. Ngan was to be the first artist exhibited at the new student gallery designed for University College. Sadly, funding became tight and the new gallery was abruptly brought to an end. It was twenty-eight years later, during the summer of 2015, that I met him again at his home and studio on Hornby Island. I had come to see the drawings and talk to Wayne about the Sung Dynasty wood kiln he had built and also to take some photographs for another ceramics exhibition at the School of Art Gallery for that fall. Wayne’s passion and creativity filled him with joy. His eyes sparkled with energy as he talked about each one of his special pieces. He was, at the time, preparing for his first big exhibition in New York City at the Natalie Karg Gallery opening in a couple of months on 15 September. We were grateful for his humour and for the generous sharing of his time. His peaceful passing on June 12 at his home on Hornby Island from lymphoma was, thus, received with sadness.

Wayne Ngan was born in 1937 in Kwantung, PRC. He is one of Canada’s most celebrated ceramic artists working in what many have identified as the West Coast-Asian fusion tradition. In 1983 Wayne was awarded the prestigious Saidye Bronfman Award for Excellence in Crafts and in 2013 he received British Columbia’s Creative Achievement Award of Distinction. He is also the recipient of the Governor Generals Commemorative Medal.

Many potters state that one of their first memories of working with clay was as a youngster. Wayne Ngan is no exception. The celebrated artist remembers that as a child he dug clay with his own hands creating objects to amuse him while his mother worked in the rice paddies. At the age of fourteen, he immigrated to Vancouver with his grandfather. Some years later he briefly studied at the Vancouver College of Art before leaving the city to build a home and studio on Hornby Island in 1967. Over the years he traveled to China and Japan studying ancient ceramics and the secrets of wood firing kilns. Back in his studio he repeatedly threw the shapes he admired until he had perfected them. His goal then, as now, is to create pure shapes with minimal decoration based on those from the Sung Dynasty and the Yi of Korea that are alive.

The materials and the kiln that Wayne uses are of utmost importance to his work. The artist states that together they give life and purity to his vessels. Wayne is able to source all of his materials from Hornby Island except for the clay; it is simply unavailable. As a result, he mixes other ingredients with commercial clay bodies. He makes all of his own tools testing them over and over again until he feels comfortable using them.

I am looking for life…Like ashes are very good materials for glazes. But the glaze on a pot is only a coat; the beauty that’s behind is the clay body, like a soul in a person. Sometimes the person who makes the pot is also a contributing factor. And the fire too. If you have an electric kiln it only radiates fire; it is not live fire. It doesn’t matter how hard you try, what comes out..is artificial. The kiln is like a womb, like a mother. (Quoted in Judy Thompson Ross, Down to Earth.  Canadian Potters at Work, 12-15).

For five decades, this talented artist produced his signature stoneware vases with hakame decoration as well as temmoku glazed vessels, raku, and, for a period, wood fired salt glazed ware. It was on Hornby that Wayne declared that nature informs the ‘alchemy’ of his work.

Working with clay is, I think, part of my nature. It is easy, the most flexible medium I can imagine. Through clay I can touch all four basic elements: earth, water, fire and all, and bring those four elements back to life. (Thompson, 12).