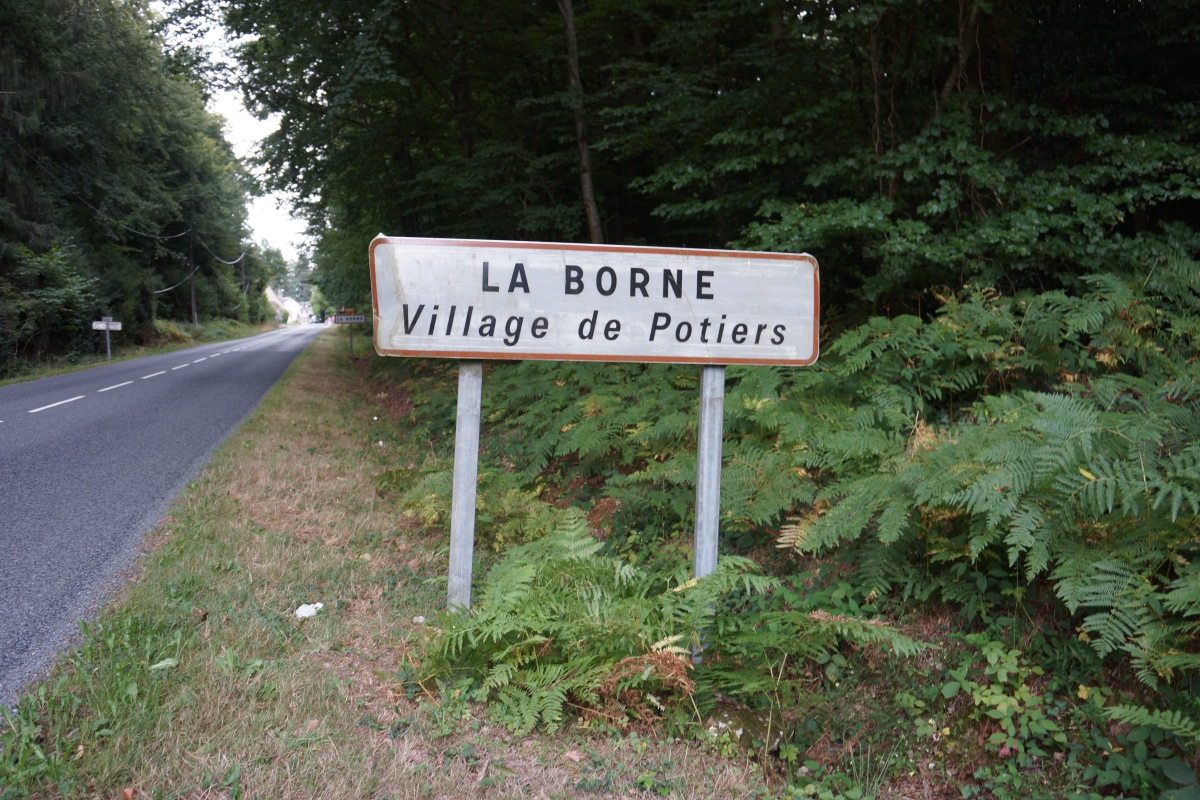 La Borne has been home to potters since, at least, the beginning of the 17th century.   The oak forests around the village were planted to provide wood to build the navy vessels for King Louis XIV’s fleet.  Today they supply the potters and their kilns and are carefully managed.  For the most part, the potters use the wood found on the floor of the forest and that from the ‘thinning’ management.  One informative talk during the conference was precisely on the history of the forest and its management, something that is not a normal topic in Manitoba because we have so little available wood in comparison.  Indeed, one of the reasons for building the new Bourry Box kiln is to be able to continue wood firing at the School but also, to conserve the amount of wood used in these firings.

The shape and type of kilns built in La Borne has evolved with economic and social changes in the country.  The early, extremely colossal kilns, often known as ‘whale kilns’, were used to fire storage jars for transporting and storing food.  In the 20th century, demands by the local farms for pottery slowly declined because of new manufactured products that served the same purpose but were cheaper to purchase.  After World War II, there was a shift in the type of work made in the village.  Up until this time, the pottery production in La Borne was entirely for domestic uses related to the storage, cooking, and serving of food and drink. After, there is the arrival of the first individuals trained in art school, many of whom worked in creating clay sculpture.  Jacqueline and Jean Lerat were two such ceramic artists.  Their son gave a superb talk about their work and the change in the type of production in La Borne at this time.

Today, the kilns in La Borne are much smaller, suitable for the production of one or two persons.  They range from the Sevres style with a  one cubic metre ware chamber that belong to Atelier Dominique Gare-Roz Herrin and the same style of kiln to Jean and Claud Guillaume.  Dominique Gare has  a six cubic metre noborigama while Svein Hjort Jensen fires a three cubic metre anagama.  Included with the Bourry Box styles and the Asian kiln types are also a number of kilns based on the designs of Fred Olsen.  Sylvie Rigal has a one cubic metre train kiln while Dominique Legros fires a 300 litre Four Dragon kiln.  At the end of October, these kilns will be lit, most at the same time, for the firing festival known as ‘La Borne senflamme’.  It has been an annual event since the 17th century.  This event and the Third European Wood Fire Conference has brought many outsiders to this picturesque village, some 40 minutes from Bourges.  It is hoped that the village and its potters continue to prosper in the centuries to come.  If it is, there needs to be a way to bring more youth to the village to establish their own studios. Indeed, there were many young people who attended the conference so there is hope!

I am grateful to all the members of the Association Ceramique La Borne for all of the events they organized.  It was difficult to decide which talk or workshop to take from the descriptions on line.  This was so unfortunate.  But, like everywhere else, choices had to be made.  The conference took advantage of local resources and the beauty of the Loire Valley.  There was an excursion to the Decorative Arts Museum and St Etienne in Bourges on Thursday and tomorrow there is a trip to Sancrette.  Of course, having time to catch up with acquaintances that you haven’t seen for four years or meeting new friends and having discussions in between the formal events really is what these events are about.

And a correction.  There are three countries interested in hosting the Fourth European Wood Fire Conference.  They are Latvia, Belgium, and Spain (Barcelona).  It had been anticipated that the next host would be announced today but, each of the venues has asked for more time to consider their resources in relation to the hundred attendees (the average of the paying guests during the first three conferences).