Our second stop, highly recommended by my old friend, Hazel, was the McManus Museum yesterday.  For those thinking about going, entrance is free.  This is a great place to take a family, lots of things for children to do and photography is allowed in all of the galleries unless it is a special exhibition.  For those who cannot climb stairs, there is a lift and a cafe with a gift shop.  The McManus is right in the centre of Dundee.  A lovely place to visit with lots of shops about.

The building was designed by Sir George Gilbert Scott, and it has been the heart of the city’s culture since it opened in 1869.  Scott was a leading architect of the Gothic Revival style.  He was born in 1811 in Buckinghamshire.  At the age of sixteen, in 1827, he moved to London where he trained as an architect under James Edmeston.  Scott became enamoured with medieval Gothic and began travelling across Europe to see the buildings firsthand in the 1840s.  Gothic Revival as it was in the 19th century drew its inspiration from the architecture of medieval Europe with its pointed arches, trefoils, and naturalistic foliage decoration.  Scott was knighted in 1872 for his contributions to British architecture.   The following year he became the President of the Royal Institute of British Architects.  Scott dies five years later; he is buried in Westminster Abbey.

The first floor has several galleries including Dundee and the World, The Victorian Gallery, The Long Gallery, the 20th century Gallery, a revolving exhibition entitled ‘Here and Now’ and the Creative Learning Centre.

Dundee and the World showcase the international and maritime collections centred on world trade.  Dundee was known for its business in jute and its whale hunting.  Today along the coast of the North Sea corporations drill for ‘black gold’ or oil.  The tour guides tell you that long before people had any need for this oil, they used oil from plants.  Around 1700 someone discovered that oil from whales would soften jute and leather, could be burned as a fuel and could be made into soap.  The boats carried crews of between 40 and 70 men who chased the whales in the North Sea and harpooned them.  They would be tethered to the side of the ship where strips of blubber would be cut off and rendered to extract the oil.  That was stored in barrels and sent back to Dundee.  It is believed that the very first whaling ship to leave Dundee was in 1753.  The early whalers travelled as far as the North Atlantic and the Arctic.  Overhunting meant that by the 19th century almost all of the northern whales were dead.  But the demand for oil did not stop, and Dundee whalers would travel to the South Atlantic to hunt.  In 1872 Dundee was the most crucial whaling centre in Britain with catches of about 200 whales per year.  The community prospered.  Sails had to be made, ropes were needed, men to load and unload and to work on the ships.  In fact, ships had to be made.  Whaling stopped in 1912 as the number of whales had significantly declined and made it uneconomical.  Whale oil was also being replaced by new oils including paraffin that was extracted from shale.

In its heyday, whale bones were used for lamp oil, cutlery handles, and lubricants while the baleen was used to stiffen corsets, for parasol ribs.  The spermaceti from the head of the sperm whale provided the wax used in candles, cosmetics and medicines.  The blubber or whale oil was processed for softening the jute in Dundee.

Other traditional Dundee industries included wool.  The fibres were sent to the Netherlands to be dyed.  Leather processing including processing the hides from Scottish cattle to make belts, shoes, gloves, hats, saddles, and harness.  Shipbuilding was, of course, a big industry. 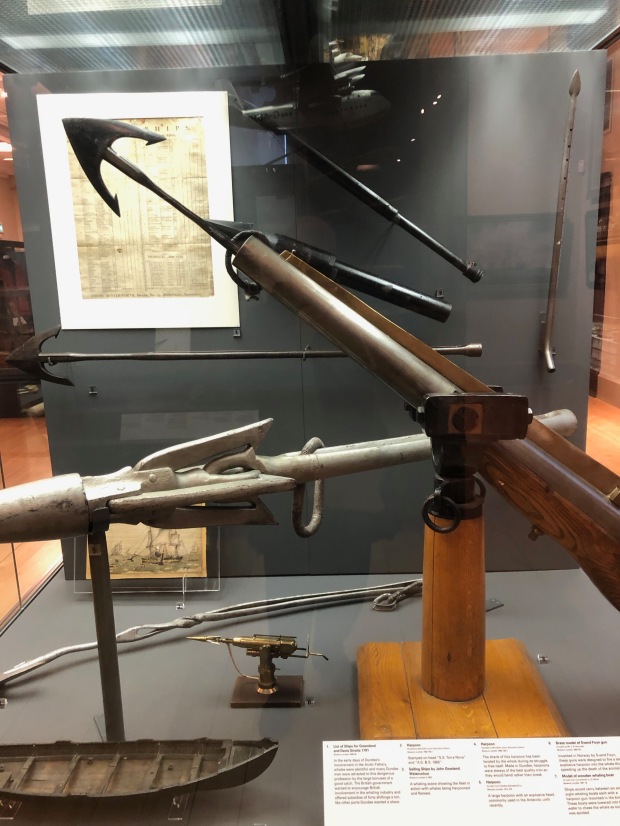 One startling exhibition was of two ‘Branks’.  Branks were used from the 1600s onwards.  They were also known as ‘Scould’s Bridles’ and were iron contraptions put on the heads of women accused of slander or sweating to prevent them from speaking.  They were then led through the town!  They were said to have originated in Germany and the Netherlands.

There is a lovely model of the city.  Notice the church and all of the cramped quarters.  When the jute mills were working you could not see the city from across the Tay, all of the fibres mixing about.  And then there was also the pollution from the coal fires.

The children seemed to love the area that might be classified natural history as much as I did.  There were hawks, Golden Eagles, rabbits of all sorts. 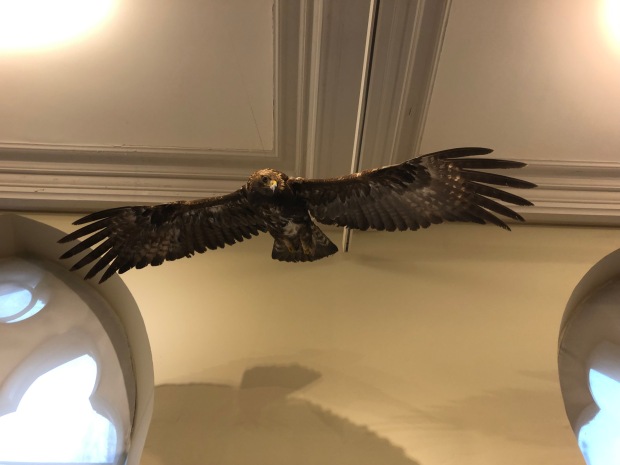 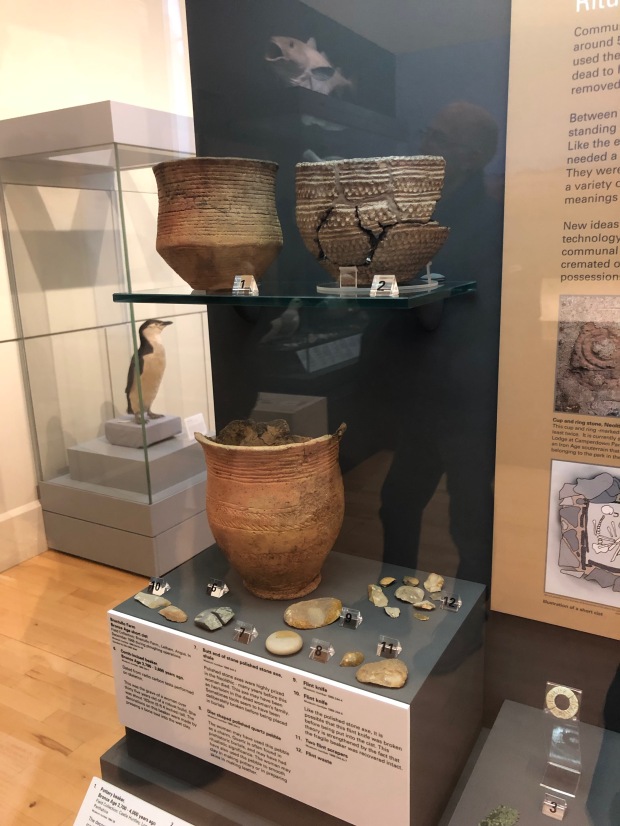 The Victoria Gallery was staggering.  It is precisely what you imagine the annual exhibition at the Royal Academy would look like with pictures stacked one on top of the other.  It was a bit overwhelming.

Restaurant recommendation for the day:  The Bellrock in Arbroath.  The fish (cod and haddock) are fresh every day, and if you think you have had great fish and chips, you need to try this place.  It will cost you a tenner (twice as expensive as in Canada but twice as good). And because of the amount you get could be easily shared!  On Sunday there is a buffet but the best fish is ordered off the menu.

2019 seemed to pass with the blink of an eye.  In late October I was with a very good friend speaking at the UAAC Conference in Quebec City.  Six weeks later I returned to that gorgeous historic city.  Could I live there when I retire?  Yes, at least part of the year!  And I will be retiring on 31 August 2020.
JA Moisan is the oldest grocery store in North America.  It was founded in 1871.  They have a bakery, a deli, a place for packaged meals to take home, a wall of speciality salts, olive oils, vinegar, Kusmi teas, coffees, candies – you name it!  There is cheese, fresh fruit, and the best croissants in the city.  There is seating for about ten persons.  Stop and rest your feet – have a latte and a croissant or the daily special.  Take home some chocolate.  The interior is the same as it was in the 1920s and 30s.  Soak it in.
Want to be pampered?  After the beginning of November, the Chateau Frontenac has specials.  The hotel is located in the Old City right at the top by the funicular.  Beginning at the end of November to the third week in December, the German market with all of its little wooden stalls stretches from the Frontenac down through this historic part of the City.  The best fish and chips are at either of the pubs on the main drag as you enter the Old City on St. Jean.  One serves Murphy’s while the other serves Guinness – Murphy’s for the Irish, Guinness for the British with a hallway between them linking the two together.  As you wander down the street there is a lovely bookshop with stationary and a good English section as well as a fine cashmere store.  One of the problems for me was that there were just too many ‘tourist shops’ with any and all things made in China as a souvenir for Quebec City.  You see them everywhere!  Sometimes it is difficult to find nice local shops in the middle of all that. 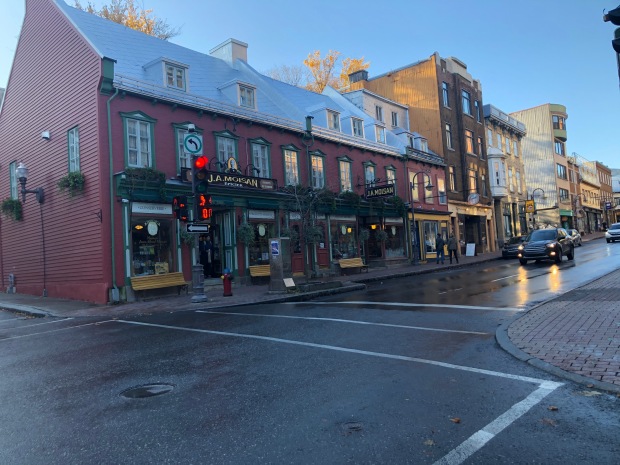 Every year the Frontenac has a Christmas tree competition.  They were magical!

And there is always a gingerbread house made like the hotel:

COVID-19 will have, by the time I update this posting, halted the plans of many.  I look forward to a return to Quebec City.  It has a vibe that is missing where I live.  A truly remarkable “European City” in Quebec, Canada.