It is hard to believe that it is now December 6.  The students in the Beginning Wheel Throwing class worked for the entire month of September to perfect their cylinders.  Then they moved on to throwing bowls off the hump as well as with throwing individual bowls on bats in October and early November.  For the last few weeks they have been working on their final project for the course.  This was a chance for them to add some originality and innovation in their work rather than following the strict guidelines of the previous two projects.  Using a minimum of 8 different forms, they were to create a single object or a set that represented their aesthetics.  The range of work really did reflect much about their own personalities and aesthetics.

Miao Liu loves copper red glazes and was very disappointed that the School did not have a copper red in the studio glazes.  But she worked with what was available and discovered that the combination of two glazes, equal parts clear and Haystack Green, can, if fired in the right part of the gas kiln in a highly reduced atmosphere, produce copper red.  Her study in small flower vases was tied together through glaze.  Haley Bean chose to make a very contemporary tea set with straight sides and pulled handles, formed in such a way when she attached them that they had an urban edge.  This was in great contrast to the more vibrant curves of the mugs made by Leandra Brandson.  Allison Banman took an entirely different approach.  Her project would be, in the end, gifts for friends and family.  She successfully carved and incised special quotes for one, cats for another, dragon flies for yet another – a time consuming task that often fails for beginners because they get the cut outs too close together.

Bowls are the mainstay of potters around the world.  A former student did a project and in it, Anwen described the meaning of a bowl for the Chinese.  It is what you eat out of every day – not the plates of Westerners.  Various shaped bowls are used for soup and rice.  If one loses their job, their bowl is symbolically broken as they have shamed their family.  Thinking about other cultures such as the Anazasi, they placed bowls on top of the heads of the deceased, piercing the center of the bottom in order to release the soul of the dead.  For us, bowls are comforting.  You can wrap your hands around them and warm up in the winter.  You can fill them with nourishing food holding your hands out in offering.  Carolyn Dyck created two series of delicate mixing bowls using a specific dowel to make certain that the height and width complimented one another.  One set was in the shape of the Sung dynasty lotus rimmed bowls while the other was plain.  One was made out of Danish White while the other was out of Death Valley – giving her an opportunity to explore the reaction of the two clay bodies with a similar glaze in the reduction kiln. Hyounjung Lee worked on rice bowls while others opted to challenge themselves by taking on the teapot.  Ellina Pe Benito was not frightened away by the thought of a tea set complete with serving plate, creamer and sugar.  But, as she knew, you have to make more than one because, invariably, something happens.  Greenware can break, pieces can stick to the kiln shelves while others may tip over in the kiln and stick to one another.  You have to always have a back up plan.  Ellina also remembered to keep the top of the spout higher than the rim so the hot tea would not go pouring out all over the table.  Tingjung Meng worked on serving and eating dishes in the Asian style while others, such as Hae Lim Choi, made coordinating cups, saucers, and plates.  Cassandra Cochrane created tiny espresso cups with rolled handles.  Lauren Sneesby is the only person I have met who created mosquito coils in the shape of pigs while Hannah worked on a sculpture in the shape of a watering can.  Eun Choi opted to paint her rose with acrylics knowing that the colours would be washed out in a cone 10 firing.  Kendra Wile surprised everyone with what was hidden inside her cups – landscapes of the ocean and the desert.  I really hope that I have not missed anyone!  Each was very special.

This group of young women stuck it out through the throwing of hundreds of cylinders to get 40 good ones for grading.  They spent all their spare time in the clay studio for approximately six weeks until the pressure was off and they could center the clay without it controlling them.  I cannot wait to see what they do in the future. 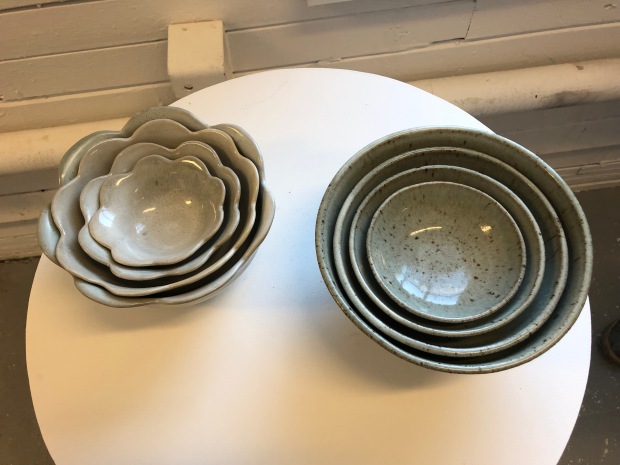 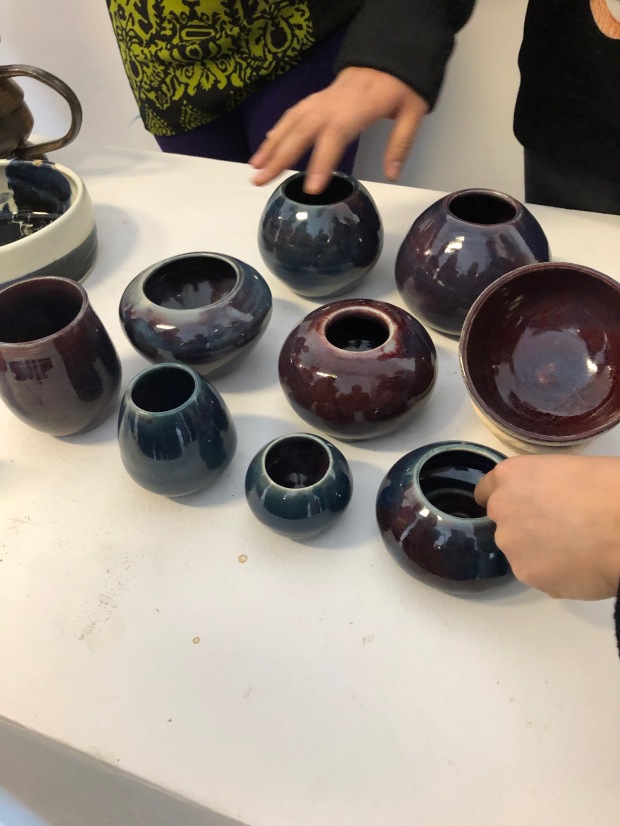 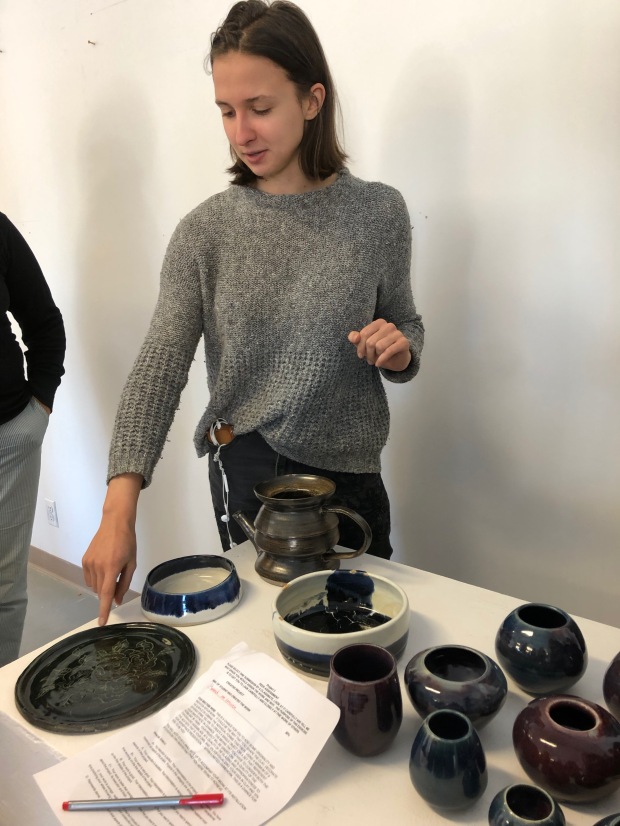 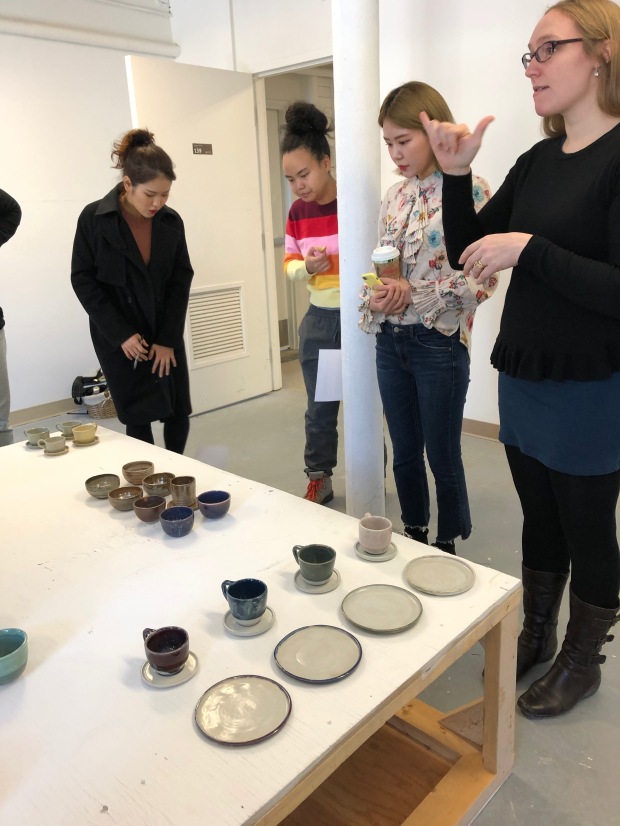 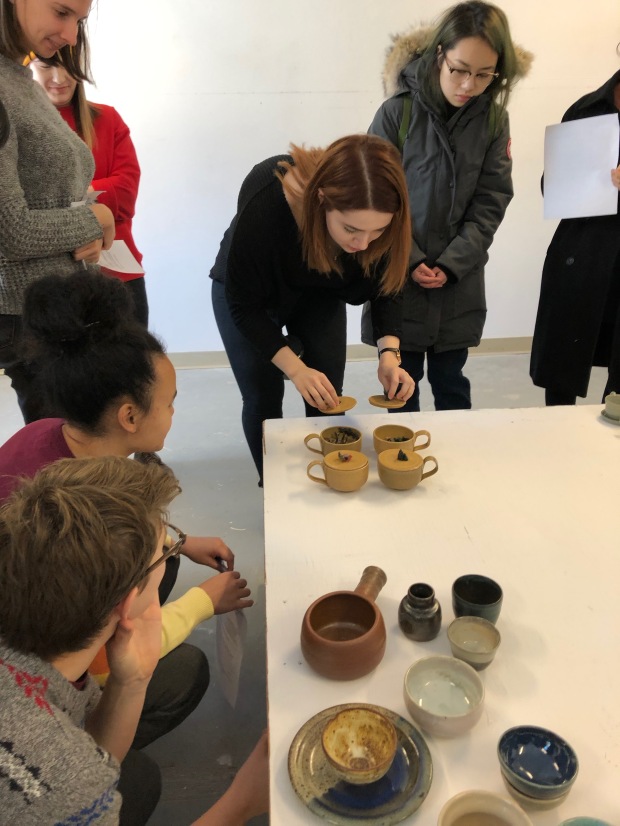 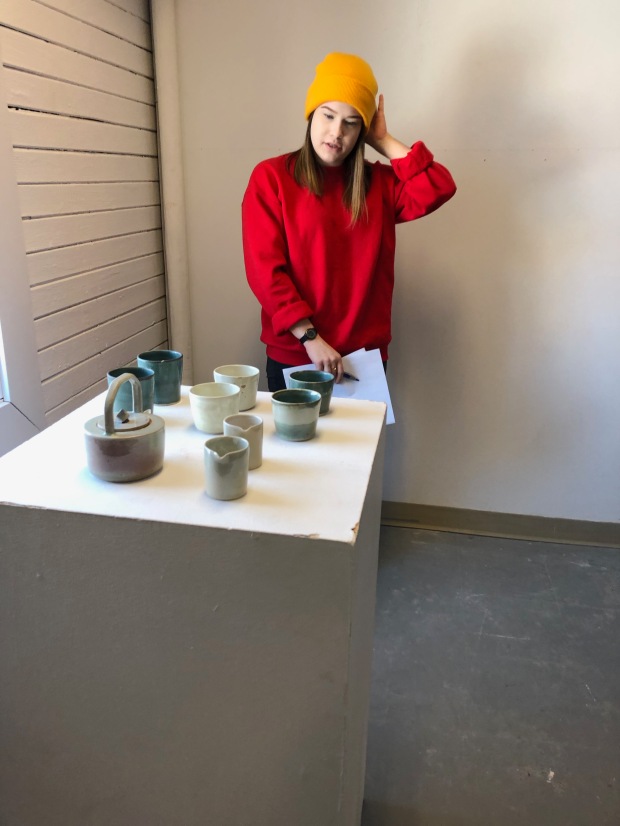 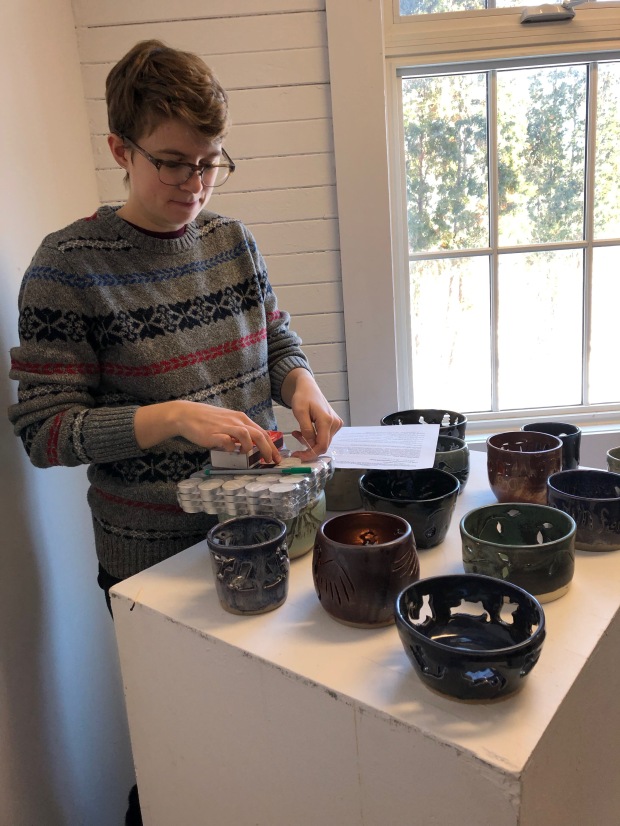 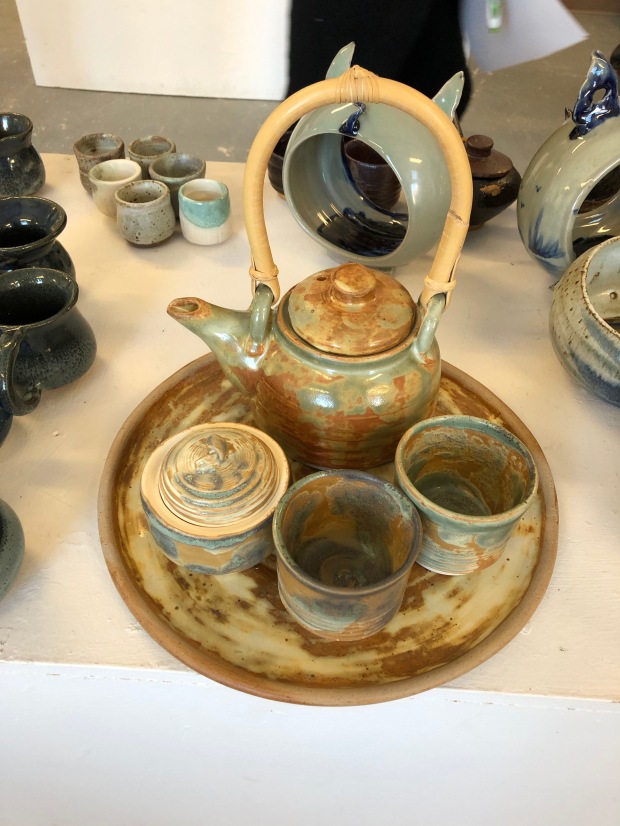